👅👌Hot food 🥘 will be available on Saturday and Sunday of the Munster Open. The food will include soups, 🍜 hot pots, sandwiches , salads, teas and coffees. There will also be a snack shop available over the weekend.

See appeal below for people to help out with this event

The Maldron Hotel at John Redmond St. 021-4529200 will offer a discounted price for accommodation to anyone attending the Munster Open

The Munster Committee needs help to prepare and run a Munster Open competition this coming January in Cork City.

The Committee is a small group of volunteer individuals from Munster clubs committed to promoting table tennis participation and skills in Munster. Whilst the bigger clubs in Munster i.e. Ballincollig, Leeside, Southcoast and Beechhill intend to run a ranking event each during the season the scale of an Open event means that we need your help.

We are calling on volunteers to help with any of the various  aspects of running an Open e.g. marketing/promotion, sponsorship, entries, logistics (equipment ,transportation, set up/take down), signage, competition administration on the day, first aiders, on site parking direction, photography, media.

Please don’t leave all the work to six individuals! If you or your family member have regularly entered competitions and have taken part in Munster events then we would hope for some help from you.

Without your help there is a danger that perhaps a Munster Open will not take place, as happened in 2019, and we really want to avoid a re-occurrence of this in 2020.

See Up Coming Munster Events page for the entry form

The league will be mixed in ability, gender and clubs. Players who enter will be put into different pools of ability. The draw will be done ‘live’ on the day. Each team will have four players from the different pools so that the matches will be very competitive! There will be reverse singles and a doubles per match.

No coaching is allowed except by players who are on your team. Emphasis is on building a stronger Munster identify as well as different clubs engaging positively with each other. We will be encouraging the better players on the teams to support the weaker players.

All TTI affiliated members 16 and over are encouraged to attend.

Learn to be a Table Tennis Coach with one time world ranked player Jing Yi!

Seán represented Ireland A team in the primary schools international competition held in Lisburn (Belfast) on weekend Friday 5th April with the Ireland A team winning a silver medal.

6 boys teams competed, including Ireland A, Ireland B, England, Scotland, Wales and the Isle of Man. Seán played 12 team matches and came out on top in 11 of these, including 2 singles and a doubles win over England who were the eventual team winners.

Seán competed in the singles event on Sunday. He qualified out of his group and went on to defeat the Scottish number 1 to progress to the last 8. Seán lost out in the quarter final to the Irish no 1 ranked player Fionn Hickey in a great 5 set match.

Thanks for the Inter pros camp in Kinsale!

Huge thanks to Alan and Tony from South Coast for setting up the tables in Kinsale. This most excellent inter-pros camp was  run by Ben -Leeside coach and Alan- South Coast coach, who will be the performance committee for the inter-pros . The two coaches gave up their Sunday and provided a training camp completely free to the lucky Inter pros players. Huge thanks also to the NPCs who attended: Emily, Ian and Shelly. Bernard and Eoin who will be Munster Managers on the day also attended and gave a talk to the players about how to prepare themselves on the day.   Good luck to all the Munster players, NPCs and managers at the Inter Pros in Dublin March 30th and 31st!

She did it! Aoife Mcmahon from Cope Clonakilty pictured below , brought home the Gold Medal from the Special Olympics in Abu Dhabi! 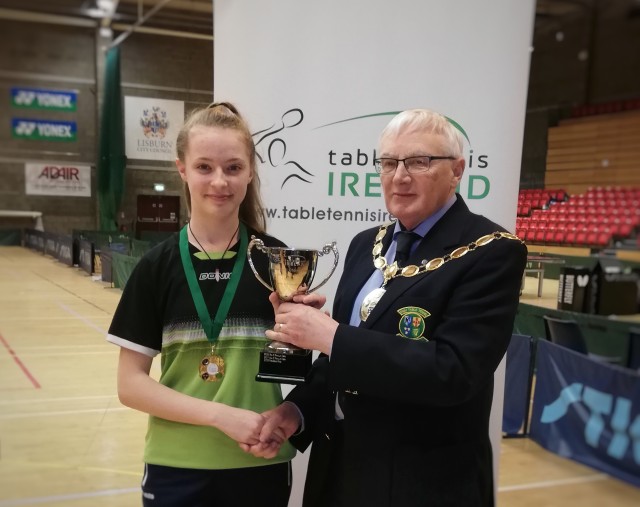 Silke won the Irish National Championship Singles U/15, the Junior Doubles and the Cadet Doubles with her partner Pervesha Ragi from Loop

Huge Thanks to SouthCoast Table Tennis Club’s Alan and Tony for the Tables and set up and to their umpires Bernard, Donnagh, Isaac, Shelly, Oisín and Nora. Together with Beechhill Table Tennis Club and Special Olympics, we organised a non qualifying regional table tennis tournament on February 17th for over 45 athletes from all over Munster. One of these players was picked to go on to the Special Olympics in Abu Dhabi!