Have you an interesting story about someone in your club. The coach , the players, or how your club got started etc. Send on your story with a photo via the Contact Us page.

you mightn’t think Table Tennis would work well on video calls, would you? Well it does work surprisingly well!

Leeside Table Tennis club in conjunction with Beechhill, has been running regular tabletennis Zooms for a while now.

Table tennis is such a technical sport that shadow play is really useful for developing good technique especially when you are shadowing great players like Silke!

There is always a great turn out! Participants would be well advised to have water at hand and to turn off the heating, as the exercises can get fairly hot and sweaty!

Bat and ball skills against a wall, off the floor or on a desk pushed against the wall are all tested in the video session.

Beechhill had been a bit lazy taking a break, but finally got up off the couch.

Beechhill emphasizes the social and fun aspects of the video meet, starting off with some non table tennis games, doing a warm up dance to “Dance Monkey” and finishing with a table tennis related quiz. they have their “Kelly’s Kitchen Challenge” where participants show their kitchen table converted to a table tennis table. They have included such shaped tables as, circular and oval!

The Beechhill Zoom is truly a team effort, with Pronsias hosting, Eoin keeping a watchful eye on security, Philip coming up with inspirational ideas on how to use boards and other homemade devices to practise with at home and myself coaching. The participants are encouraged to come up with their own quiz questions for the following week. To model warm ups, shadow plays or bat and ball skills to be as active as possible in the Zoom not just physically but mentally too!

Seeing other club members, shadow play, footwork, bat and ball skills will all help to keep skills sharp and motivation up, to continue with the sport when we come back to “live play” 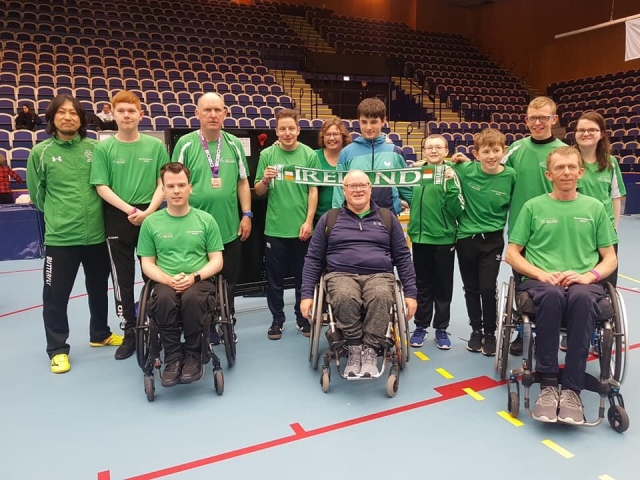 A Development Squad travelled to Malmo, Sweden, in February 2020 to represent TTI in the annual Malmo Paralympic Open Competition. The squad was one of the largest in recent years with 12 players from all three Paralympic classes and three provinces represented. The Irish squad was the largest single group of players among the 8 countries, 40 clubs, and 124 players who entered the Malmo Open this year. Supporting the 12 players were coaches/managers/minders Susan Keating and Mick Cunningham, along with additional coaching from Rachel, Hiroto and Chinatsu, who also assisted when coaches were under pressure to cover all of the matches.

While the overall approach to the competition was one of developing the skills and confidence in emerging players, the overall medal haul shows that they are well on the way on that journey – a whopping 2 gold, 5 silvers and 2 bronze medals with an additional 5 quarter-finalists in the knockout stages of a number of classes.

Coming Together around the Table

Beechhill has taken Kinsale Road under it’s wing. I coach there one day a week and Philip comes along when he can. I can teach the players the basics of the game and organise tournaments. There is only one table at the centre. The players are from all different parts of the world and don’t know each other when they first play, but table tennis allows people to come together and breaks down the barriers between them.

The players have had two in house tournaments so far, one in August and the latest in October. Players got the opportunity in September to play outside of the centre and integrate with the wider Munster table tennis community. Thanks to the community Garda Bus and Beechhill sponsorship, the players were able to take part in the Munster Fun Mixed Club League. They must have been daunted by the skill of the other clubs but they joined in and had fun anyway. They knew  the etiquette of saying sorry after winning a fluke point, to shake hands after each match and how to umpire with due care.

The next step is to organise an outing to another club maybe for a Christms tournament? We will see! ( Margie)

See some photos of their adventures below!